How To Clear Up And Clean A Green Swimming Pool 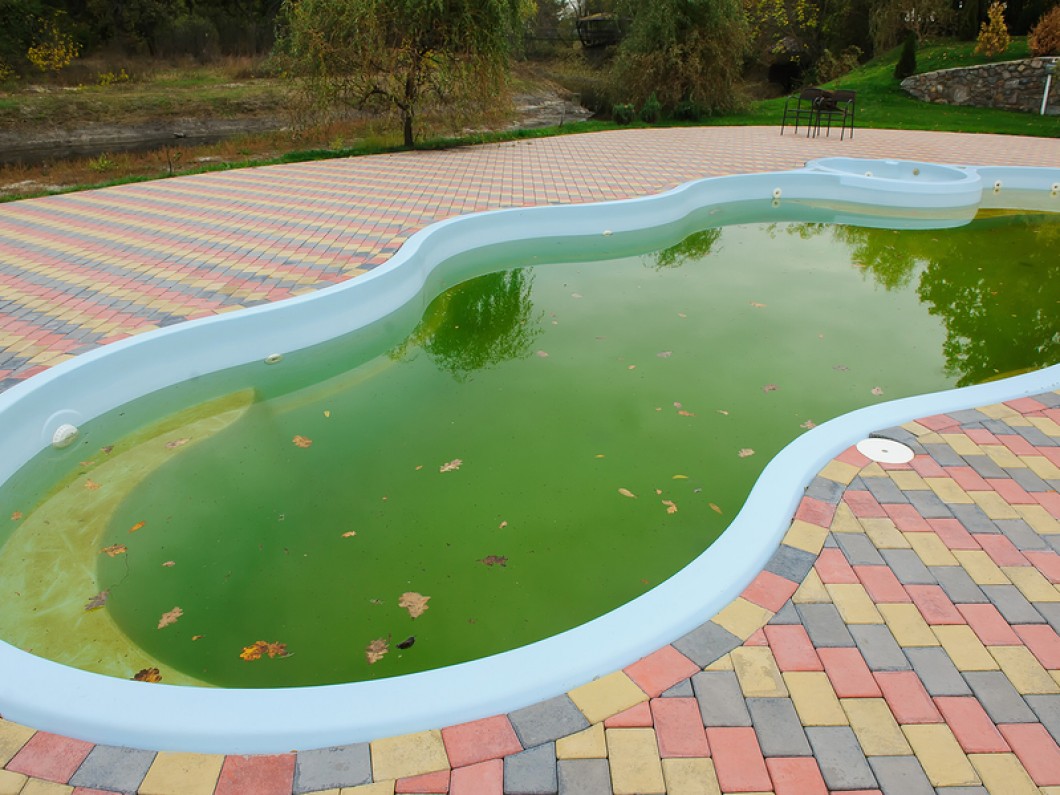 You may not want it but it does happen and you could notice your swimming pool slowly turning from crystal blue to light green and then getting darker green. This is not a healthy sign because it shows that there is uncontrolled growth of algae and once it starts thriving in growth there would not be any let up. Your swimming pool would definitely be an eyesore not only to others but to you too. No way could you entice anyone to jump into such a detestable swimming pool.

Once algae growth proliferates there is nothing much you could do unless you make a concerted effort using the right chemicals, the pool’s filtration system and your personal attention directed towards getting it back to normal. It is not impossible and it would not necessitate the replacement of the water in your pool. It would be arduous work and it is prudent to be ready for what is in store if you are to get your swimming pool back to its original condition.

Employing a large leaf skimmer remove as much of the large debris in the pool as possible. Doing this would stir up the water in the pool, but that does not matter as it would again settle down. Do not vacuum the pool floor when there is large debris especially when you are unable to see the bottom of the pool. Vacuuming when it is green and dirty could clog up your filtration system which would result in additional workload for you.

Prudently adjust the Total Alkalinity and PH levels because this would assist greatly in the clearing of your swimming pool. Use the right chemicals like PH Plus, PH Minus and Alkalinity Plus which would need to be in the appropriate range without which the water would never clear from the detestable green.

Next you would need to shock the pool with the addition of liberal amounts of chlorine. Three to four gallons of it over a period of a few days would need added to kill off the algae. Adding chlorine in such large quantities over a period of a few days is sure to clear up the pool water. Using chlorine in liquid form is advisable rather than granules or anything else because the process of clearing is quicker. Whilst adding liberal amounts of chlorine it would be best if you could also add an algaecide to kill the algae.

After you have done the best of clearing as possible, run the pool filtration system for 24 hours or more, which would trap the algae and other debris in the pool filter. Backwash the filter as and when it is clogged up with dead algae and other debris. This process would need to be continued for a few days all the while adding chlorine and monitoring the PH and Alkalinity levels.

In the meantime check whether your pool pump and filter are operating at optimum levels if it does not then your efforts would be in vain. Ensure they are operating well and if so it should not take more than four or five days to turn your green swimming pool back to its great looking crystal clear pool again. But there would be debris still lying at the bottom of your pool which would need to be cleaned out. If the debris is large some professional help in vacuuming it out would be advisable.

It may be hard work but you could accomplish the task if you do it with dedication and prudence which would cost you some money but not what you would need to dole out if you delegate it to others. This leaves a warning to you and that would be to keep your pool clean at all times and check every aspect regularly by not letting them slip away. You would end up with a green pool if you slack in your responsibilities to the proper maintenance of your swimming pool.